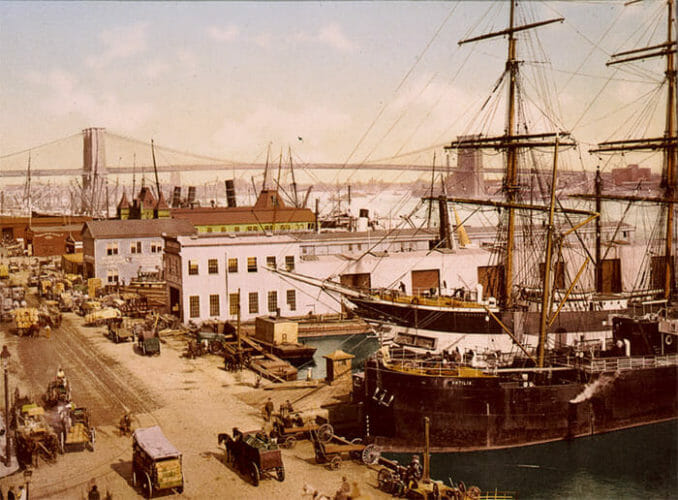 The Secret Society – On The Atlantic

Woolie came back! My family was up in the country for the week, which is where I was supposed to be, but I took the train back down. I didn’t want to be that far from the office. I’m getting a lot of side-eye from just about everybody in my life but… ghosts, mystery, magic. Concessions are gonna have to be made.

I was working this morning, and heard the familiar sound of the other AG offices… which now are just kind of relaxing, calming, like white noise… And then I heard a voice.

It was Woolie, and he was talking a mile a minute, pacing the room. More “solid” that he was the last time but flickering in and out. The dream I had must not have been a dream. I must’ve given him the phrase in my sleep-deprived delirium because he was back, and he was chatty. I started writing as fast as I could, but I had to fill in when I couldn’t catch up. I hope he doesn’t mind.

“I can remember now that I had suffered a great loss that I am still unable to recall, but was decided that I would not let it pull me down. This was in my first life. My life without magic. I had found myself suffocated by the city and all that was expected of me, so I joined a ship’s crew out of New York Harbor, ferrying goods back and forth from ports along both sides of the Atlantic. It was bliss. Freedom, some semblance of adventure. New vistas, new ideas.

We’d been out on a run for a week, returning from Nova Scotia, and we happened on a battered lifeboat with only a single soul on board. A man, older than my father, near dead from cold and thirst. We brought him onboard and I, as the most junior man of the crew, was tasked with keeping him alive until we made port in six days’ time.

He’d booked passage on a screw steamer that was coming up from San Juan when they’d run into bad weather and took on water. He said things that didn’t make sense. He said his work was almost done and he had to keep on. He’d walked a long trail and was sure he had almost reached the end of his journey. There was another world beyond this, where truth had been hidden, and he had found a secret road to walk that would lead him to the truth and allow him to leave this all behind.

He was delirious so I put him to bed for the night. But I couldn’t sleep. Something about what he’d said. The hidden truth about the world. Leaving this all behind. It had plucked a string in me, the thrum resonating in my chest, warming me. I wanted to know what he’d meant, needed to know more about this path, this truth. He was a minister and I his wide-eyed believer. I checked on him early the next morning, but he had passed sometime in the night.

In his rucksack was a waterlogged journal. In it he had written the names and locations of hundreds of places from all around the world. A list made up of sculptures, ancient ruins, works of art… Most of them had been crossed out. However, he had connected the remaining names with a thick red line that ran through the journal. On the line he’d written the words, “The Path”.

It seemed like lunacy, but I recall a feeling like a fire running through me the moment I saw those two words. The Path. There was a knock on the cabin door and I answered it, assuming it was the captain come to check on the gentleman, but there was no one on the other side. I turned back to the journal on the table.

The image of a door on its last page, where the red line ended. I felt a kinship with the man’s madness. A connection. We both saw the lie of this world, but he had sought the truth at all costs. In the months after losing all I had, I’d considered taking my own life to end my torment. To free myself. But he had persevered. Worked out the way the truth had been locked away. And now I knew with a mad, unexplainable certainty that I’d found the key, and with it, a way to leave this world behind.”

He stopped talking. I turned around to ask him a question, and he was gone. I transcribed everything I scribbled and just now looked up at the dry erase board we have in the office. He was writing on it, the words disappearing just as he wrote them, but I got them down. There was another riddle hidden in his memory…

Go have a wander
There’s memories there