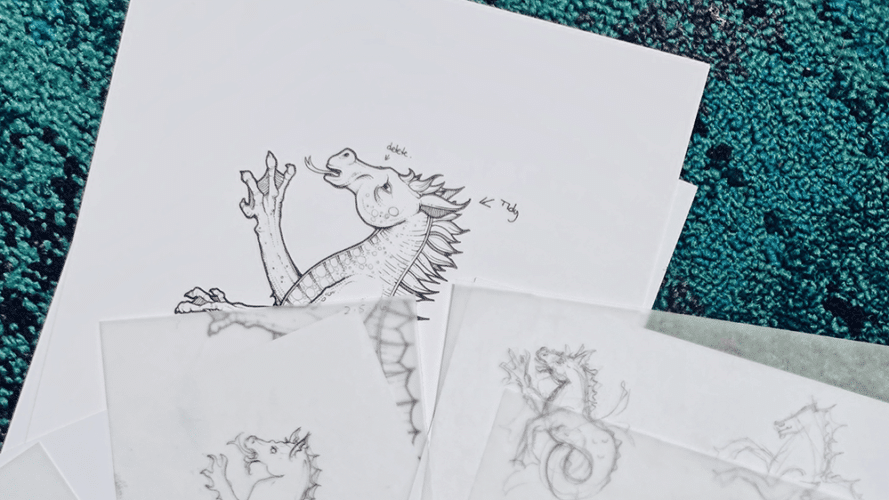 I had no idea what this world would become when I first set out to create it. It was a month after our wedding in September of 2015 when the idea first came to me.

I was still screenwriting at the time. But I’d had an idea for a children’s Hanukkah book, and I’d done a little research on traditional publishing versus self-publishing. I’d previously had no idea just how much was being done in the world of indie publishing and was really excited.

For a quick, sort-of-honeymoon (our official honeymoon was going to be a crazy trip to Disney World with the kids) Matty and I went away to a beautiful hotel in Connecticut where the rooms are separate cabins, and each has a distinct and lovely theme. Ours was “Library.”

It had ceiling-high bookcases lining every wall in the cabin. Wood-paneling, library ladders, and a second-floor balcony that ringed the place, just crammed with books.

It got me thinking about an old idea I’d had back when I lived in Los Angeles, one I’d previously tried to get made as a comic book and then as a TV show. All about magic, secret societies, missing books, and the altered history of the world.

I thought that’s the book I should be writing and self-publishing.

Which by the end of the weekend had morphed into—

What if I just became the company in the story?

By Monday, I was no longer a screenwriter. I was an indie publisher. Sure, there were lots of logistics to figure out (and lots of paperwork), but the idea had taken hold, and I couldn’t shake it.

I had always been creative, entrepreneurial, self-starting. I wrote my first book (dinosaurs) in the third grade, I’d forced my elementary school classmates to perform in plays I wrote (a sequel to Snow White), and I’d been published by the time I was thirteen.

I was ready to write a book and publish it myself.

What wasn’t I ready to do?

I wasn’t ready to create an immersive, interactive saga where the line between reader and character were blurred, and people from around the world could help me shape the story.

But less than a year from the inception of the idea, that’s what I did.

The Monarch Papers launched with a year’s worth of story, (that I’d exhaust in three months) a dozen characters, and six readers, half of which were my personal friends. I was actually traveling the day it all started. I was in LA, still straddling indie-publishing and screenwriting, sitting on the couch of my dear friends Paddy and Ginny, when this thing that no one in my life fully understood (including myself) launched.

I always thought that The Monarch Papers would build an audience for The Book of Briars and then I would settle into a more “traditional” publishing model, maybe even partnering with an actual traditional publisher down the line.

But The Monarch Papers started something I couldn’t stop, even if I wanted to stop it, and boy did I try on several occasions.

And now, three years later, the interactive, immersive elements of the story have built a community of incredible and incredibly imaginative readers who are bound to the narrative forever. In truth, we’re bound forever.

If you’ve made it this far, you’re probably one of the diehard “mountaineers” who helped me make Ackerly Green what it is today, and to thank you…

I’d like you to be the first to know that in 2020 a new interactive narrative experience will begin. Similar to The Monarch Papers in scope and immersion, but in many ways much bigger…

Because this new experience has no end date.