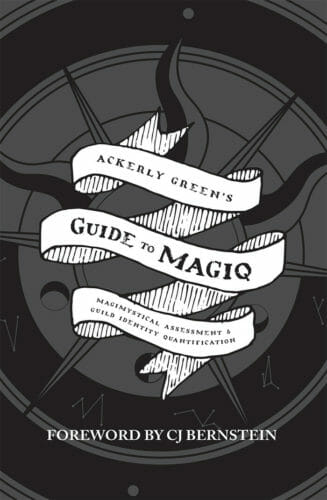 I never meant for “Magic with a Q” to take off.

The word “Magiq” was just an initialism (and an acronym) that I wanted to use to make Ackerly Green’s Guide to Magiq feel more like an academic assessment. Magiq, or M.A.G.I.Q., stood for “Magimystic Assessment and Guild Identity Quantification” and was a phrase that was also repeated on the cover of the original Guide.

But “Magiq” was sticky in a way I could never have anticipated, and soon my entire literary world was dubbed “The Magiqverse” by readers. Now, I love having a “verse” and have been a fan of many, including my ardent, fanatical love of the Buffyverse. But as the company grew, and I was looking for ways to market what I was doing to potential new readers and established community members, I realized “Magiqverse” didn’t translate very well outside of our community.

We’d never register in search results for that word without having to spend a lot of money to outspend other companies, and everyone would still have to correct the term by saying “with a Q.”

That’s why, as the story went on in The Monarch Papers and subsequent narratives, the unique spelling fell out of favor with the characters and remained more of a nod to the readers and their love of all things “magiq.” It was “a Mountaineer thing.” I still love that spelling, that special word, and it makes me happy to see it everywhere, but as an official title for the world I’m creating, it was a tough hill to climb. And because of other companies protecting their intellectual property, I could face legal ramifications for officially taking it on.

The Briarverse is what I originally called this world. To myself. When no one else knew about it. It all began with my idea for  The Book of Briars, and I knew that at the end of The Monarch Papers my readers would not only be able to read The Book of Briars, but also bring about the new age of the same name (we get into a lot of “same name” issues when we’re dealing with altered time, that’s a whole other post for another day.)

As the events in The Book of Briars continue to unfold, and The Briar Society begins, I think you’ll see why this title makes the most sense as the “official” title of the world and why we’ll be using it in future marketing and promotional materials. If there’s ever a convention for this world, it would be called “Briarcon.”

BUT— I don’t want the title “Magiqverse” or spelling magic with a q to die and am thrilled with either being used within the community and broader readership. I like that there’s history there. It’s something you built yourself, which is what this collaborative experience is all about. It’s also an echo to the beginnings back in 2016 when you were looking for any clues to latch onto and building a fandom around my work, which still gets me goosebumpy.

So, in summary, you’ll probably be seeing more reference to “The Briarverse” in the future, on social media, in ads, and in back-of-book promotions, as well as hashtags (#briarverse) but it’s still the good old Magiqverse you know and love, either is absolutely fine, and both are encouraged.